Michael Vick: The Facts Behind His Sentence for Dog Fighting

Posted on November 16, 2010 by carshelpingpets

As I look at the headlines in the sports world I see mentions of Michael Vick being a MVP candidate for the 2010 NFL season. Michael Vick is a tremendous athlete that can launch out of the pocket with the speed of a running back. There is no doubt that Michael Vick is a highly talented individual.

Michael Dwayne Vick was born on June 26th, 1980. He played college football at Virginia Tech and placed third in the list of Heisman trophy hopefuls. Michael left after his sophomore year to enter the NFL draft where he was drafted first by the Atlanta Falcons in 2001. He was the first African American quarterback to be selected first overall in the NFL draft.

Michael Vick was a huge prescience in the NFL as he ranked second among quarterbacks in career rushing yards. Even though he had tremendous talent, Vick got involved with a dog fighting ring that was running for over five years. Dog fighting is an event where individuals force dogs to fight against each other. Often the dogs involved fight to their death. Many dog fighting rings train their dogs to kill other dogs!

In April 2007, Michael Vick pleaded guilty to federal felony charges and served 21 months in prison, followed by two months of house arrest. To add more insult to his injuries, due to the loss of his NFL salary and endorsement contracts, Michael filed for Chapter 11 bankruptcy in July 2008.

Dog Fighting in the United States:

My purpose of this blog was not to continue the onslaught of Michael Vick. He has received enough ridicule and he did serve his time. However, he brought the problem of dog fighting to the forefront of society.

Dog fighting is illegal and is a form of entertainment and gambling for many neighborhoods across the United States. As a child, I grew up in a neighborhood that was involved with dog fighting. I didn’t know that at the time. I remember middle aged men walking their dogs down the street. The dogs were always extremely muscular with an attitude to match. I always loved dogs, so I would always try to pet them. Thankfully, my parents never allowed me to that. I may have lost a finger! What I didn’t know was that those dogs were trained to kill. 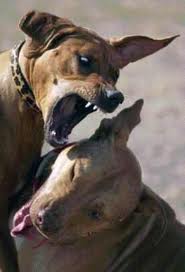 Puppies just like the one on the left are being trained to kill and the results are horrifying! Just see the pictures! Illegal dog fighting was first discovered in the early 19th century in the United States and was slowly outlawed by all states. However, dog fighting continues to be a form of entertainment in rural and urban locations.

Dog fighting is one of the most serious forms of animal abuse. It is a horrible reflection of humanity. Ignoring their conscience, individuals use dogs to make money and to entertain themselves. It is a truly sad practice that must end. How would you like it if I trained you from the first day you were born to kill anyone that resists you? What if I forced you to fight to your death? I think most would say no. Animals should be treated the same way! Just because humans are higher on the food chain does not make it acceptable to torture animals to their death!

What You Can Do To Stop Dog Fighting:

If you are under the suspicion that dog fighting is occurring in your neighborhood, call the police, local animal shelter such as the Humane Society or animal control. Never try to be a hero and protest against the dog fighting ring alone. The individuals involved with dog fighting are often armed and dangerous!

The dogs rescued from dog fighting rings or other types of animal abuse cases are sent to animal shelters. That is why it is so important for you to support your local animal shelters. Please consider to adopt a dog or a cat. If you cannot adopt a pet, donate your car, animal toys and food to help the organization provide a second chance for many deserving animals.

2 Responses to Michael Vick: The Facts Behind His Sentence for Dog Fighting